Multisystem Cranial Polyneuritis and Ganglionitis in a Dog. Journal of Veterinary Internal Medicine (211) 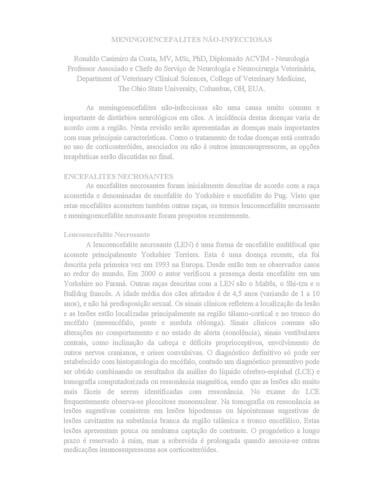 Multisystem Cranial Polyneuritis and Ganglionitis in a Dog. Journal of Veterinary Internal Medicine (211)

Prévia
A 4-year-old spayed-female Golden Retriever was evaluated at The Ohio State University Veterinary Medical Center for multiple cranial nerve deficits. Two months previously, the dog presented to the referring veterinarian for difficulty closing the jaw. A presumptive
diagnosis of trigeminal neuritis was made. No treatment was initiated. Over the next 3–5 weeks, the dog was able to close the jaw, but continued to have difficulty chewing food. During this time mydriasis developed in both eyes (OU) and the dog became light sensitive. A week before presentation, the dog developed difficulty swallowing and frequently would gag and produce a very thick, viscous material throughout the day. No vomiting or regurgitation was observed. Bilateral temporalis and masseter muscle atrophy also was noted and progressed
over the previous 2 months. No medications had been prescribed at the time of presentation, and the dog had been otherwise healthy before the onset of clinical signs.